The “Heritage Live-Phase II” project is underway: European musicians meet Pakistani and Afghan counterparts in a path of exchange, sharing and inclusion where music is the protagonist.

Islamabad – Music and the world that revolves around her is the heart of the “Heritage Live-Phase II” project signed with the signing of the Memorandum of Understanding among the supporters of the initiative on February 12th, at the residence of the Austrian Ambassador Nicolaus Keller, in the Pakistani capital.

“Heritage Live – Phase I” was an initiative in line with the Italian cooperation strategy in Pakistan, which is part of the broader Pakistan Poverty Reduction program, PPR, through aid credit of 40 million euros to remote communities in Pakistani districts along the border with Afghanistan. It is one of the fruits of the joint effort on the sustainability of the PPR initiated between the Pakistan Poverty Alleviation Fund PPAF and the AICS office in Islamabad over the past two years. The new project extends the scope of the first phase and keeps the relationship with the PPR actors alive.

Ambassador Keller, the coordinator of the EUNIC Cluster – Islamabad (the Union of European Cultural Institutes), hosted the ceremony, which involved the representatives of Austria, Bulgaria, the Czech Republic, France, Germany, Italy, Poland and Romania, all supporting countries of the initiative. The Italian Ambassador to Pakistan, Andreas Ferrarese, also joined the event. 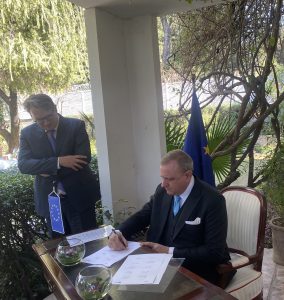 The project stems from a call from the European Union to which the EUNIC Islamabad network responded and saw the support and involvement of the Italian Agency for Development Cooperation based in Islamabad.

The selection of the fourteen musicians among Pakistanis and Afghan refugees in the country and the seven European countries is ongoing. FACE, the Foundation for Art and Culture and Education to encourage artists to create and share innovative projects, will coordinate the process.

An Italian musician will also participate, and who will be selected from 4 pre-identified candidates.

In the week between 21 and 28 May next, all the young musicians of the “Heritage Live-Phase II” will be hosted in an exceptional “musical residence”, will be asked to participate in a workshop on the development of skills and the generation of income, seminars, creative jam sessions, the drafting of musical compositions for the realization of the final concerts. At the end of the week, two performances will be held in Islamabad and Lahore, proposing the music, elaborated in the week of musical creation and sharing. Moreover, various digital platforms will collect and spread all the material resulting from a multicultural collaboration.

The project aims to support vulnerable musicians, both Afghan women and refugees and young people from rural areas of Pakistan, to improve their socio-economic condition, developing sustainable, inclusive and creative economies. Furthermore, in line with the 2030 Agenda for Sustainable Development, which says, “Leave no one behind”, the project “Heritage Live-Phase II” aims to preserve the vast musical heritage of Pakistan while promoting intercultural dialogue between the European Union and the land of the Pure. Strengthening local collaborations and creating new international ones are other objectives of the initiative.

And if “music can do”, as a famous Italian song said, Italy and the AICS field office in Islamabad are ready to support it.