A few days ago on the eve of International Women’s Day, the Director of AICS Islamabad, Emanuela Benini, received Maryam Bibi, an emblematic figure of the commitment to the well-being of women in Pakistan.

Maryam Bibi is the founder of Khwendo Kor, an NGO that promotes Viable Villages where, on the basis of trust, attention is paid to women, children and families, who live in the remote areas of the northwestern part of the Khyber Pakhtunkhwa Province and in particular in the territories known as as FATA (Federally Administered Tribal Area), today called “New Merged Districts”.

During the meeting, the head of AICS Islamabad office was accompanied by Crisitna Menegazzi, coordinator of the Cultural Heritage Program and by Attilio Aleotti, AICS consultant for the observation of the sustainability of the activities and initiatives within framework of the Pakistan Poverty Reduction Program (PPR). It’s been an illustration of the methodology that this NGO has been applying for a few decades in favor of women, in one of the most conservative provinces in the country.

The Director of AICS Islamabad reminded her guest how much environmental protection and protection activities go hand in hand with people’s wellbeing. In its strategic and programmatic vision, AICS Islamabad has as its top priority the inclusion of young women and men in decision-making processes, which according to Emanuela Benini aims to “catalyse energy and promote self-development.”

Maryam Bibi talked about the activities of her organization that “are implemented in favor of the integration of women, for an autonomous development path that arises in respect of the local culture, the exchange and accompaniment of women in order to allow women and young people to take charge of their own destiny. ” 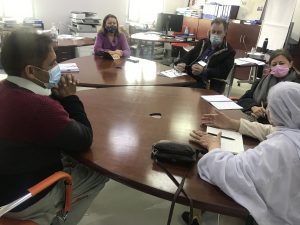 Maryam Bibi has held various leadership positions: she has been involved in the political decision-making process on efficient energy technologies; implemented community-based training programs; participated in the design of educational systems for Afghan refugees. Ms. Bibi’s commitment to the development of women and children has been recognized nationally and internationally. In 2000 she was awarded by the United Nations with the recognition of social service; in 2001 he received the Human Rights Award from the International Labor Organization; in 2005 she was one of the “1000 women” nominated for the Nobel Peace Prize. The government of Pakistan decorated it in 2001 with the Star of Excellence National Civil Award. And in 2003 with the Fatima Jinnah Medal for women who have distinguished themselves in the social sector.

Maryam Bibi holds a Masters in Social Policy from the University of York in the UK and founded Khwendo Kor in 1993.

The Project started in a village with four collaborators and has since expanded to more than 300 cities, and has a staff of over 340 people. Khwendo Kor’s main areas of work are social organisation, community-based women’s education, micro credit, primary health care, advocacy and building partnerships at both organisational and community levels. It aims to improve the education, health and economic well-being of women and their children. Khwendo Kor in the Pashto language means “house of the sisters”. The organisation works with women, men and local leaders create a stable mechanism of territorial collaboration that tends to improve the quality of life of the entire community.

It is an organisation you can count on to carry out interventions in favour of Women in Pakistan and to train NGOs operating in Afghanistan with a view to gender.